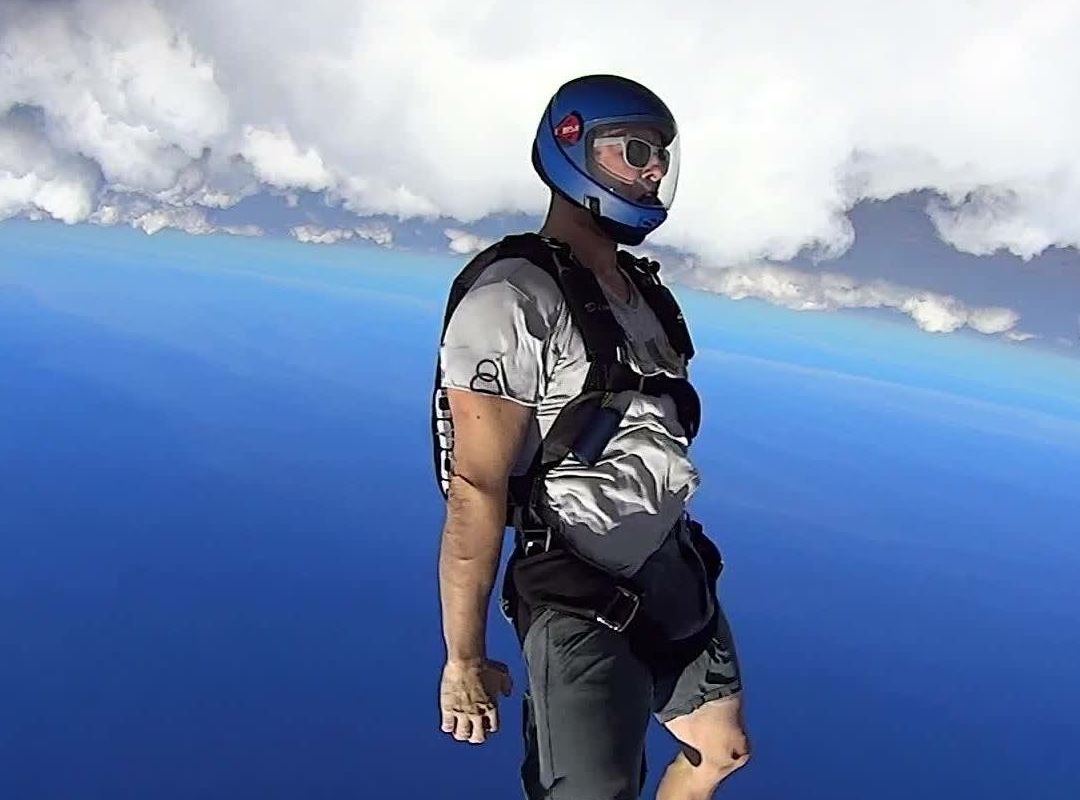 When and why did you start skydiving?

I was an ROTC in college and on track to fly in the Air Force. Then one night I was meeting a friend at a bar who I hadn’t seen in years. The clean cut guy showed up with a beard and my first question was “where have you been?” He told me that he started skydiving. The next morning, after little sleep, I learned to skydive. Then a few weeks before graduating from The University of Central Florida, I walked out of the Student Union and saw a job booth for iFLY, which used to be called Sky Venture. I interviewed with them and got a job as an instructor at their original Orlando location. As the company began to grow and expand, I became a trainer and then I started competing. I was on the U.S. outdoor skydiving team and competed in a few national championships, but eventually switched passions and focused more on indoor skydiving. So when they announced that they were going to move their headquarters to Austin, I got offered a position to come run this facility as the lead instructor. Since then the company has grown so much and I’ve moved up to an examiner role. I also started to travel and compete along the way. We had the first World Cup of Indoor Skydiving here in Austin and my teammate and I actually won. But we’re not competing in the next one because I’m more focused on the business development side of the company.

That’s like an astronaut trying to explain what space is like to someone who has never been. The internal sensation of flying is something you only get when you are doing it.

Why the shift from outdoor to indoor?

For me it was the duration of flight and the things that you can create. When you skydive outside, you get about 45 seconds and the intensity is really high which is great. But you can fly for an hour in the tunnel and the results are so much more evident. And indoor is spectator friendly, which is pretty cool.

How often were you jumping out of a plane?

I would do 20 jumps per weekend. We actually set a world record in 2012 for the largest head down vertical formation — there were138 of us in 6 planes. Once I did that I felt like I hit my peak and was okay to leave. I still go every couple months with friends but not nearly as often.

How often are you indoor skydiving?

Do you ever get bored?

No! Well I don’t really like flying by myself that much. I will sometimes when I’m working on something, but I like to fly with other people and make routines. The fun part is challenging yourself to create something.

How does the scoring work in competitions?

For dynamic rounds there are two LED lines that are 180 degrees from each other on opposite sides of the tunnel. You have to cross those lines in certain ways and make shapes with your partner — if you don’t cross them in the predetermined way then it’s a penalty. Then there are free rounds, which are based on technical difficulty, artistic value, and execution.

You compete with a partner?

Yes, it’s either two-way or four-way for dynamic competition. We competed in the two-way and won the Dynamic Championships and the Skydiving World Cup.

So you and your partner are the best indoor skydivers in the world? 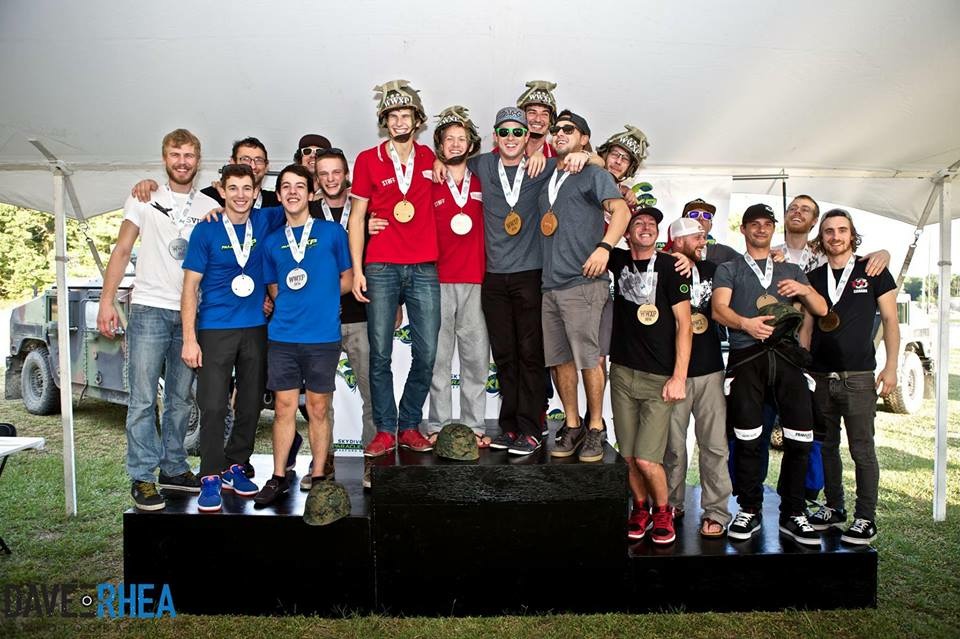 How long does it take to get certified? How long to become good?

It takes a month of training to become an instructor in the wind tunnel, and then you are just a little spring chicken. You can only teach people to fly on their belly, which is the basic body position. It takes a year to become an instructor level four where you can teach everything. The sport is progressing so fast so you have to practice every single day to get good. It took me about three years before I could consider myself good. And now I’m transitioning into more of an administrative role so I really have to make a point to fly since everyone is catching up.

Tell me about this tunnel in Austin. It’s one of the best ones, right?

Yes, this one is up there. But we try to make each one that we build better. I was just in Singapore and that one is the best I’ve ever flown in.

How many are there?

I heard that the wind tunnels were originally built for the Air Force. Is that true?

I think the first very basic wind tunnel had military ties, but our company’s first one was made for skydivers and tourists. Now 80% of our business comes from first timers and newer flyers while 20% comes from experienced flyers.

How much does it cost to fly?

It’s $64.95 for the basic package. But experienced people will fly in groups which makes it much cheaper.

What’s the long-term goal with iFLY?

To have a tunnel in every major city and for indoor skydiving to be seen as a legitimate sport.

Have you ever had any scary moments while skydiving?

Yeah, I’ve had a few. We call them malfunctions. I’ve had three cutaways, which is when your main parachute doesn’t open and you have to use your reserve parachute. It sounds a lot crazier than it is. The advanced parachutes can be tricky when they open, but your reserve always opens. I had one where my knees hit me in the face and knocked me unconscious.

Yeah. So by the time I came to I was too low to cutaway and the parachute was really sketchy. I ended up landing just fine, but that was a freak one in a million chance that it worked out because there were hundred-foot trees everywhere. That was pretty scary. But you get oblivious to it when you’re around the sport — cutaways and malfunctions happen when you jump a lot. You just kind of become detached from the fear and the risk.

Any accidents in the indoor tunnel?

I’ve put myself in the hospital twice. It’s never students who get hurt; it’s people who are trying to push the limits. One time I hit the wall really hard and gave myself a concussion so I had to go to the hospital. Another time I hit the wall and pinched nerves in my neck. My C5 and C6 vertebrates moved which was pretty scary.

What do your parents think about your job?

My poor mom. I was riding motorcycles and flying planes when I was 16. I was skydiving at 21.

You got your pilots license when you were 16?

Yeah I’ve gone back to flying a few times and was actually going to switch careers, but I stuck with indoor skydiving. I started flying little Cessnas when I was 16 and then got instrument ratings because I thought I wanted to fly commercially, but then I decided to move to Austin and do this.

So you just love flight?

Tell me more about what your mom thinks of all this.

My mom is very supportive but I’ve probably shaved a couple years off her life. My dad has always been all about this. He’s very similar to me. He skydived in the military for a bit and he’s a pilot and he drives motorcycles too.

What aspects of your job do you dislike?

The wear and tear on your body from taking first timers through the tunnel. They are really trying to learn but their natural tendency is very physical on your body. I started having shoulder issues so that was rough. I don’t really take students in the tunnel anymore. I do professional coaching for experienced flyers but I don’t take mom and dad out on a Saturday afternoon. My new role is a lot more sitting in front of a computer — that’s a new experience for me. It’s not that I dislike it; it’s just new. I’m not as active but I get to be part of the growth of the company. It’s hard to find something negative though because I’m around a bunch of happy people all the time. There’s just something about people who want to do this and be around it — it’s a certain breed.

All the smiling faces. I have no stress in my life. And I get to fly everyday.

What’s a normal day like here? What’s your routine?

It’s 9 to 5 now, but at lunch I’ll sneak away and come fly. That’s just when I’m here. I travel tons so the normal is it being not normal. I’ll be home for 5 days and then I’m gone for a month. It’s inconsistent.

Tell me about your most recent trip.

I just finished a contract with Royal Caribbean Cruise Lines to train their staff to use the iFLY tunnels on their ships. We flew from Austin to meet the ship in Dubai and then we rode from Dubai to Oman, Oman to India, India to Malaysia, Malaysia to Singapore, and then we flew from Singapore to Tokyo, Tokyo to San Francisco, and then San Francisco to Austin. So we circumnavigated the globe in two weeks.

The tunnel was on the ship?

Yes. We would train the crew from 7pm till midnight and then hangout with them in the crew area. We would go venture off into each place and then come back and train. It was a vacation mixed with work.

When is the next trip?

And what about competitions? Do you have any coming up?

I went to Bulgaria a few months ago and did a big presentation in front of the National Sports Committee to have indoor skydiving accepted as an official sport. I’ve started to be more on the political side of competitions so I can push the growth of the sport. We competed, we climbed, we won — now it’s about giving back. We want to give the sport more legitimacy so it can grow. I’m going to do that for a little bit and then come back compete more.

What was the result of that presentation?

Indoor skydiving is now considered a sport by a unanimous vote.

Is there anything else you want people to know about the industry?

We’re a sport and we want people to come join.

Question from our last interviewee: In what way do you feel your job is leaving a better world for the next generation?

I’m creating the opportunity for people to learn how to fly. I get to give the gift of flight.

What one question do you want the next interviewee on People With Cool Jobs to answer?

What was the most valuable experience of you life?